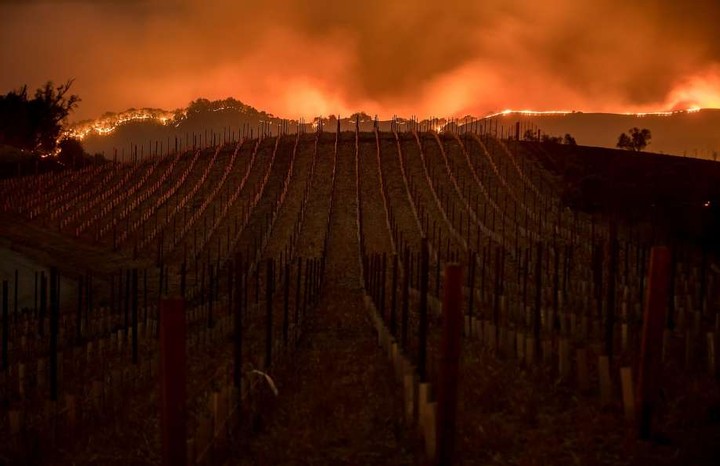 Sonoma County is without question one of the most beautiful places in the world.  Bound on the west coast by the powerful Pacific Ocean and stretching inland to the majestic mountains, we enjoy a mild, Mediterranean climate in Sonoma.  Not too hot, not too cold.  About eight months of dry, warm days follow the blustery winter rains.  Our grape vines hunker down for the winter and, in their dormant state, are immune to the pounding rains and cooler days.  The water table builds holding this precious resource in anticipation of the grape vines’ needs as they spring back to life.   The growing season ensues and another incredible vintage is born.  There is a reason Sonoma County is respected world-wide for our sumptuous wines.

Of course there are variations on the theme.  Some summers are cooler than others, some warmer.  Some dryer, some wetter.  But, all-in-all, a pretty perfect place to grow wine.

But those long, dry summers don’t come without their inherent risks.  While everything may be an emerald green during the winter months due to the abundance of water, the hills quickly turn golden as the rains cease and the dry, warm summer takes over.  Without exaggerating, it takes about two weeks for the grassy hills to dry to a golden hue again once the rains stop.  There is a reason it’s called the “Golden State!”

Wild fires are, therefore, a constant concern here.  Even in normal times, without the added challenge of the last few years of serious droughts in Sonoma, the hills are laden with dry foliage and dead trees.  Fire danger is always on one’s mind here and every precaution is taken avoid sparking a blaze.  The simple task of mowing dry grasses can present a hazard if sparks are generated in the process.

What we really don’t need during this very dry time is wind.  And certainly not prolonged 60 mph gusts of bone-dry air.  Yet that is what we experienced just a month ago.  As harvest was winding down, with 95% of our grapes in, Sonoma County experienced its worst wild fires in history.  We all know of the horrific damage they caused.

As those fires raged, as people lost their homes and as some their lives and their pets, the world moved on.  The few grapes still out there continued to ripen though many wineries simply couldn’t bring them in due to lack of power and/or water, if they even had a winery left to work with.  Workers fled to safer places and wineries struggled to finish up harvest.  While it seems trivial in respect to the lives and property loses we experienced, winemakers had to be concerned about “smoke taint” as the fires persisted.  We were in a huge cloud of smoke in Sonoma for over a week.  As the winds died down and that smoke lay over the vineyards, the threat of smoke taint  expanded by the minute.  A winemaker’s concern is that the smoke settling on the grapes will be absorbed into the skins of the fruit.  While a smoky character might not be detectable in the grapes per sé, the threat is that during fermentation the smoke will be released from the skins into the developing wines.  In miniscule quantities, compounds in the smoke can add a less than appealing character to wine.  Some say that it reminds them of  the stench of cigarette ash trays or the smells we associate with a burned out fire pit.  Not pleasant at all.

There are measures winemakers can take to reduce the incidence of smoke taint in wine during these sorts of trying times.  We learned a lot more about this during the Mendocino wild fires of 2008.  “We know a thing or two because we have seen a thing or two,” that repeating theme in these blogs, is so true.  I am happy to report that, at Notre Vue and Balverne, we had all our fruit in the winery prior to the horrific fires and, therefore, have no issues with smoke taint.  And, fortunately, that is the case for most wineries.  Two weeks early, these fires would have been devastating to the 2017 vintage.

As I type this blog it is gently raining and what a wonderful thing that is!  Not only do we need the rain as per usual, but the rains will help the scorched, barren land spring back to life quickly and the golden hills will return to their characteristic emerald green.  So we cheer on the rains, we pray for our family and friends with horrendous loses due to the fires and hope that good things will come.  And remember, a holiday celebration without a glass or two of Notre Vue or Balverne wine, well, that’s just another scary thought!

Wishing you all a happy, healthy, and safe New Years!

Commenting has been turned off.

Receive updates on events, vineyard news and wine releases. We would love to stay connected with you. Join our email list by filling out your email in the space provided or feel free to call us at 707.433.4050.